In the first of a new series of interviews with artists and designers who use linocut, I bring you Will Webb, talented designer of books and book covers.  Will worked for Bloomsbury Publishing for eleven years where he was head of cover and book design, before going freelance in 2006.  His clients include the V&A Museum, Random House and Faber & Faber.

When did you start making linocuts?  Are you self-taught or were you taught how to do it?
I really got interested about 5 years ago, I had done some on and off before, but it really took hold then. I pretty much taught myself, I have a great book about relief print making published by Dorling Kindersley (now out of print) which was useful for figuring out how to register properly to do multi colour prints, though I still havent quite grasped how reduction prints work! 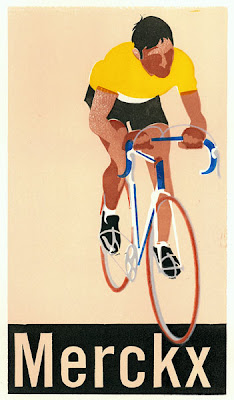 What do you like about working with linocuts?
I like the physicality of the whole process, from the initial drawing, the cutting, the inking and the printing. Its really magical when you print the colour blocks and then the final black outline pulls it all together. I particularly enjoy the cutting, the smell of the lino, the resistance and give as you slice away…  I use oil based inks and again the smell and tactileness of the ink is hugely appealling. Working with linocuts also gives you the perfect excuse to go to Intaglio Printmaker and buy nice things! 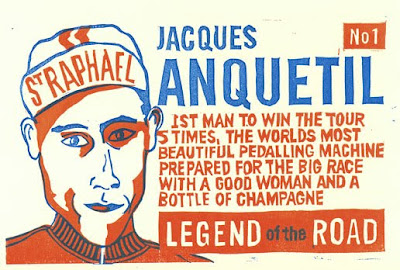 Which artists/illustrators/designers do you most admire and why?

Well, I really admire lots of different people! In terms of lino of course Edward Bawden and less well known Robert Tavener. I also found a book of chapbook covers by Posada which were really nice, mostly a salmony pink background colour overprinted in black, with lots of lettering, very different from his more well known day of the dead stuff. I also like the woodcuts of a Breton artist, Rene Quillivic (I am sure the guy who did the Thom Yorke cover must have also seen Quillivic’s work, especially one called ‘La ville d’Ys).  The Kuniyoshi exhibition at the Royal Academy was quite inspirational, I had a go at woodcut printmaking using japanese techniques and tools after I saw that (results left), a really nice process, especially printing with the baren and water based inks, but hard work!
To what do you accredit the recent resurgence in hand-made illustrations and linocut in particular?
Computers! I think after everyone got over the awesomeness of the mac they realized that moving a mouse around a screen was not that much fun. I think that there has been a general shift in culture towards a more ‘analog’ approach, wether it be growing your own veg or knitting or listening to folk music! Also I think that things happen in cycles, so for a long time photography was more prevalent, certainly in book covers, and now its illustrations turn, but it will go around again…
Is there any special lino technique you have developed?
I sometimes use a hybrid of computer and lino for doing book covers, because it saves time. Say the cover has 3 colours I will cut the 3 blocks and print them separately all in black then scan each into photoshop and create a new layer for each within the same file, that way you can colour each one and make adjustments to the colour very easily, plus you dont have to wait for each colour to dry. With Island at The End of the World I cut the lettering separately at a much larger size then scanned and reduced it in photoshop and dropped it on the background seascape. 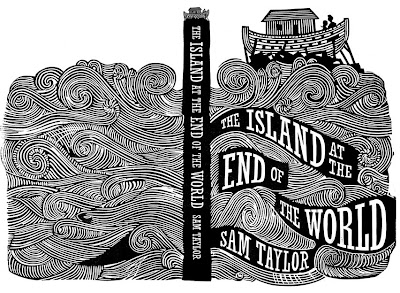 Which tools do you use?

The trusty Swann-Morton 10a scalpel is the first out of the box. I make an angled cut on either side of the line and then another angled cut to clear out a V shaped groove on either side of the line, which is the same as the japanese woodblock hangito technique. I then clear larger areas
with a variety of U and V gauges (The Swiss Made mushroom handle ones from Intaglio – I also bought some of Lawrences top of the line ones but they are not nearly as good. I make the prints on a Tofko screw press (right) that I bought at Lawrences. It has a lot of clearance above but you are limited by the width between the side uprights.
Where can we see and buy your work?
At the moment only on my website. I dont have any facility to sell them from the site but if anyone wants to buy them they can email me.
Will’s website: www.willwebb.co.uk 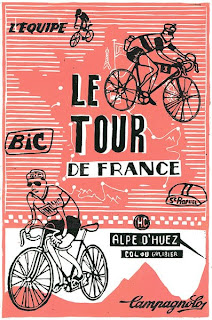 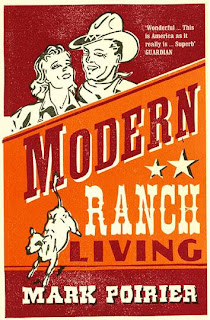