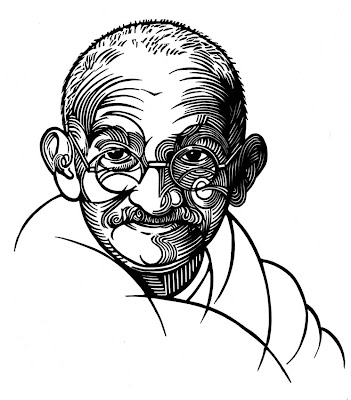 This is an illustration of Gandhi I did recently for The Folio Society. I wanted to convey some of the complexity of Gandhi’s character while still giving the feeling of lightness. I used linocut to make this layer first, and a second, colour layer was created afterwards to go behind. The illustration will go on The Folio Society’s new cloth-bound edition of Gandhi’s autobiography. 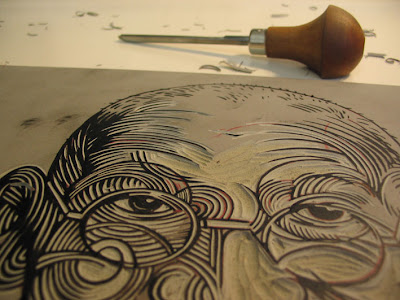 A close-up of the lino showing the carved lines. In the background is one of my trusty Swiss Pfeill linocutting tools which I bought from Intaglio Printmaker in London. 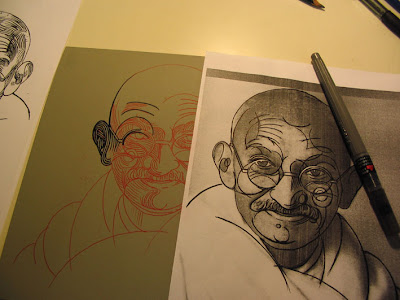 To create the ‘rough’ illustration I used a photo of Gandhi as a base to work over using my Japanese brush pen. I started off drawing just arcs and built up the patterns from there. I wanted to reflect the iconic round wire-framed glasses Gandhi wore but without being too obvious. Once the rough was approved by Folio I traced the image down onto the lino using red transfer paper. 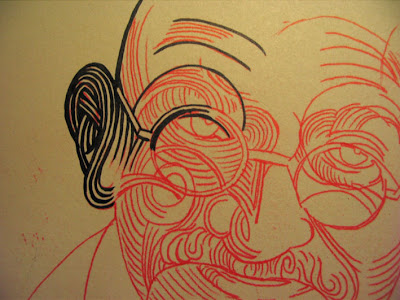 Once I had transferred the image to the lino I went over it again with the brush pen to further develop the image and make sure the modelling and tones were right before I started carving. 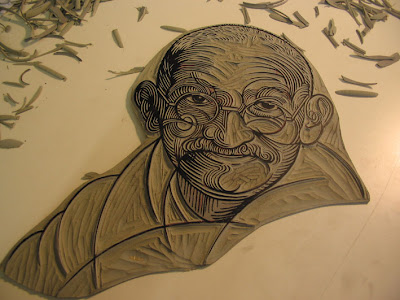 The finished linocut. The black lines are not from having been inked but just from the brush pen. This way I know almost exactly how the printed image will look (except of course it will be reversed). Although more lino can be cut away after printing, any minor changes I need to make to the final illustration are done in photoshop.
« Gandhi portrait for The Folio Society
New Dinosaur print – work in progress »