An exhibition of large-scale linocut prints and animations using linocut, curated by Nick Morley as part of Pushing Print 2011 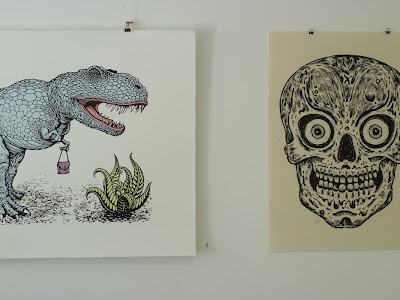 Here are a few photos of the exhibition I have put together at the Pie Factory Pop-up Shop in Margate. The exhibition is part of Pushing Print, an annual festival of printmaking in Margate. For this show I invited artists who push the boundaries of linocut printing, both in terms of scale and in their approach to mark-making and subject matter. 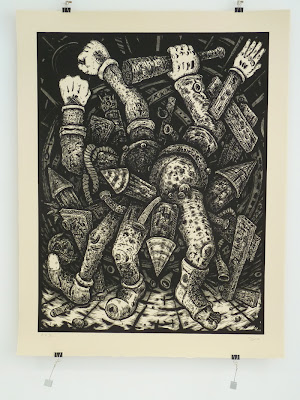 As well as several of my friends and colleagues from East London Printmakers I invited two artists from the USA and one from Germany to take part. Bill Fick is an American artist whose work I have admired for a while (see this previous post) and whose book I reviewed for Printmaking Today magazine. Fick makes big, bold, graphic images that borrow from cartoons and comic strips but have a rawness to them which is compelling. His print ‘Hooligan IV’ dominates the exhibition due to its sheer size and dynamic composition of thuggish limbs about to bash each other in. 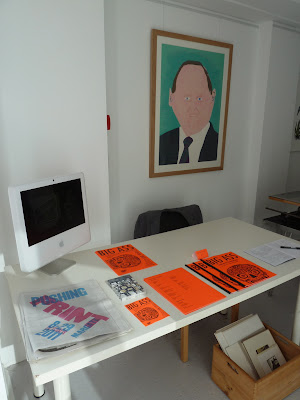 The entrance to the exhibition is dominated by Steve Edwards‘ print of a businessman. Set against a garish green background, his enormous pockmarked features seem to be oozing out from his shirt collar like some grotesque tumour. Steve uses caustic soda to etch the surface of the lino, creating organic textures which contrast with the decisively carved marks of the suit and tie. 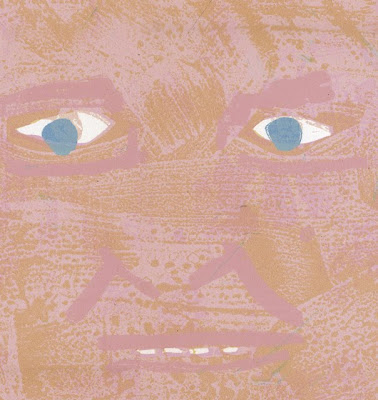 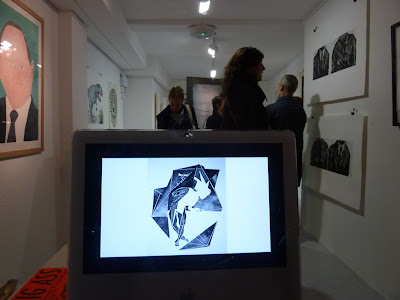 I came across the work of Carsten Nicolaus through his Flickr page, which features his subtly multi-layered linocuts and animations. The animations do not move in the traditional way, but rather pulse and vibrate. The frames are made up from the same lino blocks with slight variations in density so that they appear to become more and then less transparent. 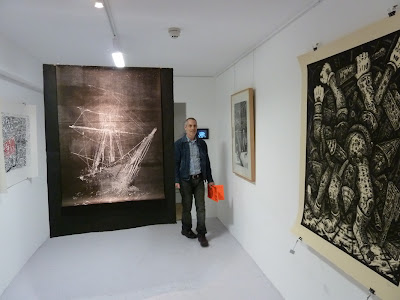 ‘Ghost’ linocut of a ship by Nick Morley

My own linocuts are suspended in the centre of the space. They are Ghost ships, positive and negative prints hanging back to back and turning gently in the air currents as people walk past them. 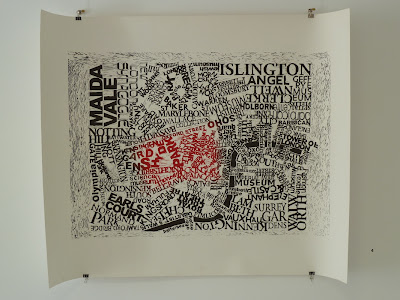 Mark Andrew Webber‘s city maps are packed with visual information. He walks the streets collecting found typefaces before creating a composition of placenames. These prints are at once playful and epic. His latest project is a map of Berlin which will measure over 3 metres long. Also on display is one of his linomations (another was featured previously here) made from almost 300 separately carved and printed blocks. (note – Mark coined the term ‘linomation’, which I stole)

More animations in the show come from the USA courtesy of Scott Minzy, who prints his linocuts and animates them afterwards on a computer:

Chris Pig and Peter Rapp make large linocuts using techniques borrowed from engraving. Using parallel lines which follow the forms and vary in width they are able to convincingly describe a 3d space on a 2d plane. Chris Pig’s print ‘Champagne Charlie’ is one of a series of portraits of larger than life characters who inhabit a slightly seedy netherworld of prostitutes and gangland tough guys. 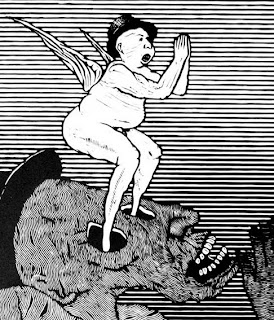 Peter Rapp’s disturbing ‘The Choice of Fallacy’ is a development from a series of etchings he made of praying figures. The nightmarish quality is intensified through this increase in scale, creating an image which burns itself onto your retinas. 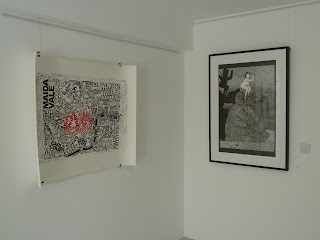 Wuon Gean Ho uses Japanese vinyl, a smoother material to the traditional linoleum. This allows her to wipe areas of the block clean before printing, creating areas of soft tone which contrast with the crisp cut marks. She builds up texture and pattern in her prints by carving parallel lines. At first glance these are straightforward representations of clothing, but on closer inspection patterns reveal themselves in the creases of the fabric, hinting at something beyond the surface, or possibly in another dimension. 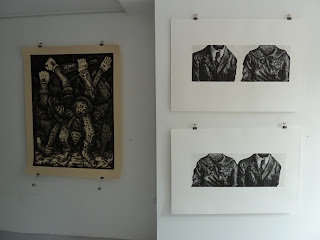 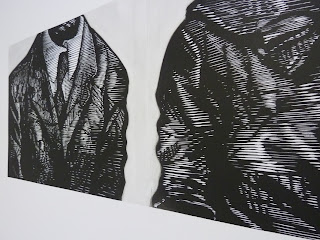 And finally, another one of mine – Dodo with a yoyo. Not a BIG ASS print but a bird with BIG ASS charisma. 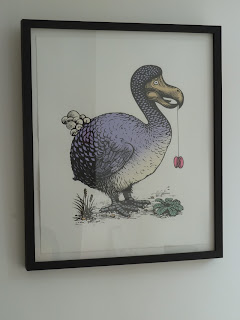 The exhibition runs until 19th October. I’m hoping to expand it and take it to another venue in London in the new year – watch this space.