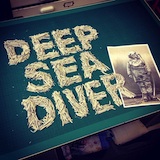 I’m excited to announce I have a new film out. It was filmed and edited by Hazeleigh Prebble, a talented filmmaker based in Margate. We spent three days filming and Hazeleigh put his heart and soul into editing it into the coolest linocut documentary ever. Well the coolest one I’ve ever seen, anyway. 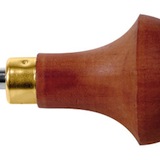 10% off linocut supplies at Jackson’s Art

Jackson’s Art Supplies are currently offering 10% off linocut supplies. I particularly recommend the Swiss Pfeil carving tools, which I use myself. They are usually £12.20 each (inc VAT) which is the cheapest I’ve found, but now they are just £10.98 each, which is an absolute steal! They also have quite a nice looking sharpening […] 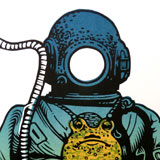 My deep sea diver print is finally finished! It’s the first multi-coloured linocut I’ve made for ages, and the biggest. I’ve made bigger prints, like the T-Rex and Dodo, but used screenprint for the colours on those. This time I had to print and register seven separate lino blocks. Below is a photo showing the […]